Not working with Victoria Glendinning

Not possible to work while John Tavener’s Protecting Veil is playing on BBC3. Victoria Glendinning’s choice. When she was insane with grief, this music did the grieving for her. I leave the computer, lie on the floor to listen. This is what I watch: 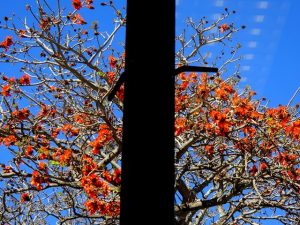 Afterwards, I get up, sit at desk once more. Glendinning’s next choice: one of Richard Strauss’s Four Last Songs. Lie down again.

Colleagues from the Journalism School at Eduardo Mondlane University in Maputo visited our J-school during the winter break for a workshop designed by Jeanne du Toit. She put together this event to help the Mozambicans think about their curriculum and how best to re-design it so that Mozambique gets the journalists it deserves.

First up on our panel was colleague Simon Pamphilon on professional identity and what that might be.  His closing comments on the challenges of teaching identity formation created an effortless segue into my piece, which is mostly about how Virginia Woolf and Margaret Atwood tell me what I should care about when I teach journalism students. My old-fangled ideals (such as forging journalists who set out to change the world) led easily into colleague Chris Kabwato’s presentation on our imperative to tell the story not told.

I love academic texts, honest I do (goodness, some of them even go to bed with me) but it’s poets who light my way. Consequently, I aim to insert them into every academic opportunity (and perhaps also consequently, they usually get deleted from my journal articles). So I was surprised and pleased – brimmed with joy, in fact – to hear Chris quote this poem by Bertolt Brecht and reference Palestinian poet Mourid Barghouti via author Chimamanda Ngozi Adichie.

Chris’s people may have better struggle credentials than my people but it’s gratifying to know Virginia and I are not alone in the journalism academy.

I thought this blog was dead. Then I went to PE and saw this remarkably stupid garment. 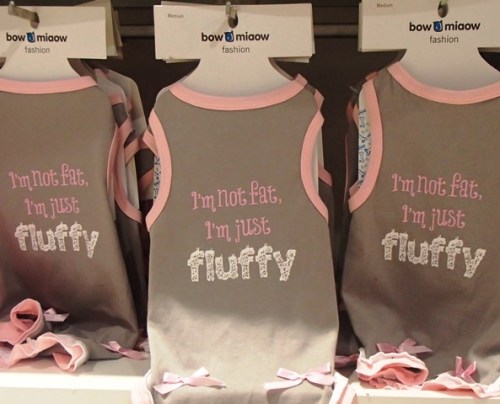 Even more annoying than the garments was my tacit complicity in their commercial success. Because these remarkably stupid garments were hanging at a toddler’s eye level, I was forced to squat to photograph them. Which drew the attention of passing women. “Adorable!” they agreed, and stopped to consider the remarkably stupid garments they would not otherwise have noticed. Media culpa.

All this returned to haunt me today as I watched this indictment on the business I aim to serve, and which returned me to this video sent to me by a student earlier this semester. With first years like her preparing to enter a world which hawks remarkably stupid garments for people too young to make informed choices, I choose to hope that my picture-taking dilemma will be expiated. 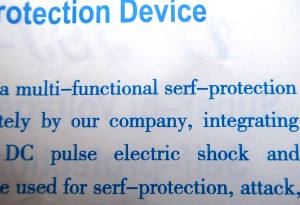 I agree with Stephen Fry on communication pedants. But the typo in my Taser leaflet still makes me smile.

That was my wishlist for Friday’s writing class. And I got all three.

Natalie Goldberg’s way of practising non-attachment (read Spontaneous Writing Booths in her Writing Down the Bones) got me thinking about the students in this term’s Creative Non-Fiction course.

Every Wednesday they courageously read their drafts of the week’s essay topic. Every Wednesday I can feel the room go clammy with collective apprehension. Then I hear lots of encouragement and appreciation in response to what we’ve heard. Then there’s silence. Finally one will ask – very softly – how long such-and-such a piece is. “It felt longer,” the brave one – very tenderly – says. The writer responds equally bravely, and the conversation usually ends with everyone commiserating over the culling of darlings.

Goldberg reminds us that writers need to be great warriors, and that people want “the cut of truth”. That’s what I wanted this class to practice.

So, not being in Minnesota on Friday, I modified her suggestion to suit us. We each wrote down three topics we wanted written about. That meant 18 potential writing presents were in the box. Round 1: we each selected one slip of paper. Wrote on that topic for eight minutes without thinking (much) or editing (much). Closed the document, emailed it to me, deleted the document. Round 2: Select another slip. Write. Send. Delete. Round 3: Like that. Again.

We modified our methodology as we went along. For instance, no need to continue padding if you think you’ve made your gift before the time’s up. It could be non-fiction or poem-like non-fiction. It could resemble a snatch of your notebook.

The purpose of typing was to avoid handwriting being recognisable. I printed out the 18 pieces, snipped off any incriminating identity hints, and matched up the topics with the original list I’d made at the start. (OK, so I knew who had written what for which recipient but someone had to operate the writing gift registry.) Everyone was delighted with their presents so we decided to read them aloud (curiosity trumps shyness). Although the students recognised each other’s voices in many pieces, the starting position of anonymity did help to unclasp the fear of judgment in every writer.

It was less easy, though, to delete our darlings, a keystroke I did not police but handed over to individual consciences. However, I failed to anticipate that even those who did delete their original documents would still be able to retrieve copies from their sent emails. (And now they’re filed in cyberspace.)

Even so, we all agreed it was an enlivening exercise – and we each got three terrific presents. Thanks for that, Natalie. I got hope, balloons – and The Eastern Cape:

Where the dry grasses rise high as children, and the brown-green hills rolls for miles around, you will find me.

Perhaps you will find me beneath the pink blossoms of a winter cherry tree. Or perhaps beside a field of aloes. Or a row of juicy succulents sprinkled with pink vygies.

In the late evening, when the last of the sun’s embers dip beneath the horizon, you might find me at the blaze of a bonfire, spreading my warmth to the stars above.

Perhaps you’ll look to the sky, dimpled with milky stars. And there, just beyond the mountain peak and rocky highlands, you’ll see me.

Perhaps she is about to burst with fragile joy

First world problems are illustrated by the following examples:

If you have experienced any of the following you are a first-world problem sufferer. Do not worry. You are not alone.

It was only when I was much older that my dad told me the truth about success. Cracking open a beer for me – our first father-son beer a few months after my 18th birthday – he sat heavily in stretched fabric of the fold-out chair on the shore of the Zambezi river. We were on a sand bank, a small island called Chundu lost in the legal no-man’s land between Zimbabwe and Zambia. He was quiet, and I sipped my beer. The sun burned. A bird called. The wind whispered.

“If a genie appeared right now, what would you wish for?”

He spoke in a quiet voice, as if mostly to himself.

He chuckled, and then regarded me sombrely.

“Happiness, son.” He looked at the beautiful view and put an arm around me. He sipped his beer again, and tilted his head back, smiling in contentment. “Wish for happiness.”

It would just sit there in the corner of the garden growing stupid lemons.

When the lemons were ripe they would fall from the tree and land on the grass. There they would sit and rot.

It was when those lemons fell from the tree that I hated them the most.

There I would be innocently strolling in the garden and I would see a lemon racing through the air.

It would hit me.

They were always the rotten lemons. My mom had instructed my brothers that they were not allowed to pick lemons off the tree and so instead they used squishy, rotting, smelly, mouldy lemons to torture me. 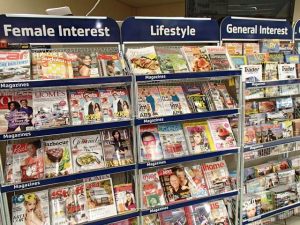 Hard to tell what they mean by this re-arrangement of mags, down at the store with the terrible car park. Do they mean women may hold up half the sky but they’re not generally interesting? Females have some interest but no lifestyle? Females have interest but males have lifestyle? And they brought the mags from behind the guavas all the way to the front door to peddle their notion of editorial niche marketing. If this is national merchandising policy, they’ve picked the wrong politics and there’s no reason we should pay.

About once a week I ask the Creative Non-Fiction Intensive class for three things they’re grateful for. I’m conducting a term-long (as opposed to long-term) experiment. If this exercise reveals anything interesting or helpful for writers, I’ll let you know. For now – and today is the exact mid-point of our time together – we are listing. Today’s lists include:

So far, the experiment’s going great!

A Lights Witch
Blog at WordPress.com.